We’re lucky enough to have a mature Damson tree in our garden, I reckon it’s probably about 12 feet high by at least 15 across and after probably 10 years of abuse, it’s a heavy cropper. A damson is pretty much a small plum with a deep purple skin, pretend they’re plums and you won’t go far wrong. As with most soft tree fruit, you can’t get away with leaving ripe fruit on the tree for longer. Either the birds get it, it falls off and goes manky, or it just goes manky. Which means you’re generally left with having to figure out a use for a tree full of fruit in the space of a couple of weeks.

I’ve turned the past 2 years crops into batches of chutney, a process takes a fair amount of effort, but rewards you with nearly a years supply of tangy goodness. Making chutney is a similar idea to making jam, preserving a short-season crop over the whole year, but this time it’s a savory preserve. The preservation is done with acid rather than sugar syrup, the main mandate is that you use vinegar that’s at least 5% acetic acid, all the other ingredients are for taste and texture.

If made correctly, a chutney should impact most of the basic tastes: bitter, sweet, spicy and savoury. I can’t imagine that salty chutney is A Good Thing. This means you need to carefully balance the recipe, something which I’m very much still working on. Last year’s batch was too bitter (not quite sucking on a lemon, but that sort of idea), this year’s batch is very sweet. The difference was about 200g of sugar over a 6 kg recipe.

I didn’t take photos of this batch, mostly because I knew that after spending an hour and a half editing and de-stoning plums I would have a fairly short temper, so I thought I’d cheat and get caught out when Flickr removed the images I was using.

Edit out any nasty bits of the fruit with a seriously sharp paring knife and remove the stones. I did it the manual way because I didn’t want to leave anything to chance, other people suggest stewing the fruit up in a bit of the vinegar then using new rubber gloves to feel for and remove the stones. I had something like 5Kg of damsons and it took me nearly 2 hours to prepare, your patience may vary. If in doubt, get fruit that’s slightly unripe, firm fruit is much much MUCH quicker to prepare.

Don’t bother peeling the apples, but you should remove the pips and stalk, chop them up a bit.
The onions are mostly for texture, so chop them to taste. Peel and chop the ginger.

Don’t forget to clean and sterilise the jars you’re going to put it in: hot soapy water, rinse and put in the oven until you need them. Same as for jam making.

Put the fruit into a good preserving pan and slowly heat it to start to release the water, should take about 10 minutes before the fruit starts to simmer nicely. Add the rest of the ingredients, bring it to the boil and then settle in for a very long slow simmer. Simmer it long enough to reduce the volume by between 30-50% depending how thick you like your chutney and how patient you are. 1 1/2 to 2 hours is the minimum.

Simmering chutney is quite difficult unless you’ve used a pan that is much much bigger than the volume of chutney within, mostly because trying to boil a thick mass like chutney results in it going “GLOP” a lot, and generally spitting chutney all over the kitchen walls, floor, ceiling and cook. You can cook it faster if you want to stir it nearly constantly or at the slowest minimum if you want to let brownian motion and convection do the hard work for you.

When you have reduced it to your preference, bottle it in your hot jars then begin the clean up operation. Lots of boiling water and soaking. 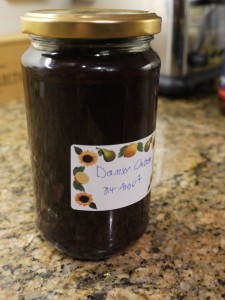 Last year’s batch was simmered for about 2 hours and ended up fairly tart, with the plum and onion texture remaining and was a nice shade of purple.

I simmered this year’s batch at a much much lower heat, about the lowest my hob would go, for getting on for 5 hours. It didn’t burn, nor stick, but turned an almost Branston caramel brown at about 3 1/2 hours and is very smooth.

On the balance of things, I vote for the short simmer, but that means you have to be prepared to stir like you’ve never stirred before, otherwise it will burn, which will dominate the taste.